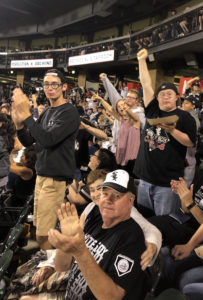 Athletes from Lincolnway Special Recreation Association (SRA), Oak Lawn SRA and Gateway SRA were all in attendance. When the time came for the first pitch, participants of the Sunshine Through Golf Camp Program congregated in an outfield section just at the end of the third-base line. Fans of the South Siders lucked out and saw the White Sox cruise to an 8-3 victory over the Texas Rangers. The Sox’ emerging star pitcher Dylan Cease recorded a career-high nine strikeouts and second baseman Yoan Moncada tallied a home-run to right field, bringing in 2 runs in the bottom of the sixth inning.

The CDGA Foundation thanks all donors for their contributions and involvement, see you next year and go White Sox!